I thought it would be interesting to compare some of the adidas and Puma models made over the years. As you all know the two firms were born out of a sibling rivalry between Adi and Rudolf beginning in the late 1940s. Both companies made technical innovations in the sports shoe industry and both were guilty of peering over the others shoulder from time to time which often ended up a bitterly contested legal dispute in court. Here’s a look at some models which bear more than a passing resemblance to one another…. 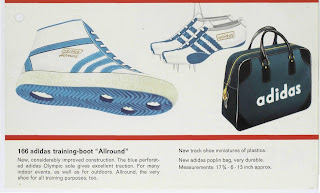 Adidas first produced this boot in 1948 as the ‘Basketballstiefel’ and they were issued to the occupying American troops based in Bavaria. They became known as the ‘Allround’ in 1954 and went through a number of changes in design throughout their long history - here is what they looked like in 1964. 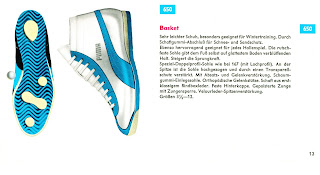 Puma also produced a similar boot called ‘Basket’, note the colourway and same holes cut into the sole. These acted as a rudimentary suction cups.


I recently had the pleasure of conversing with a very important man in the history of sports shoe sales, I’m indebted to him for solving a mystery about my favourite adidas production factory – adidas Austria. Why do I like Austrian shoes so much? Well if you ever held a pair in your hands or put them on your feet you will know that the build quality is simply amazing, right up there with the best. Also Austria tended to be a bit more inventive with colour schemes in comparison with its German brethren who were (at least initially) conservative in selection. 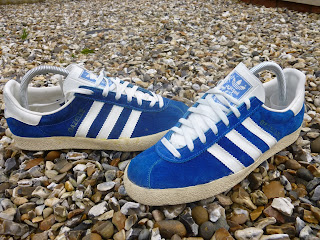 The build quality on these 1986 Austrian 'Gazelle' is amazing. 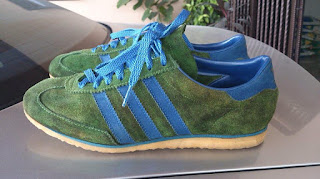 An example of the use of different colour schemes used by adidas Austria - 'Speed 76' [owned by Funkyadi].

I don’t actually know too much about adidas Austria, there isn’t a great deal of information on the internet about adidas production in general, but what I can tell you is that the factory was based in the Viktring neighbourhood of the city of Klagenfurt, close to the border of Slovenia. Production began in 1968 and they worked in close association with the German factory, often sharing the same management and involved in the testing of prototype shoes. They also used the same shoe designs as the German factories (albeit with slight modifications), although from the early 70s they began designing their own models. The ‘Jeans’ is probably their most famous shoe;- incorporating an upper used on the ‘Rio’ and ‘Azzurro’ with a thick wedged midsole sitting on a saw-tooth profile outsole as seen on the ‘SL 76’. The Klagenfurt factory tended to produce training shoes, tennis shoes and football boots. They didn’t produced any shoes for specialist sports and only briefly flirted with track spikes in the early 70s. They did produced nylon running shoes but this didn’t really happen until the early 80s.

'Jeans' - This version from 1986 with a trefoil sole is commonly known as 'Mark II' in collectors circles, although adidas themselves never called it that at the time. 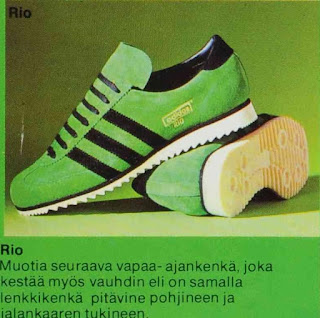 'Rio' introduced in 1975, the upper was an inspiration for the 'Jeans'

What has always puzzled me is why build a factory there? Austria borders Germany so from a logistical point of view there wouldn’t have been any problem with transporting goods there. Austria has a relatively small population (just under 7.5 million in 1970) so I couldn’t find any reason why it would need its own production plant. The Austrian sports market is also very seasonal with summer training shoes being swapped for ski boots in the winter months.
Adidas Austria did export its shoes though, particularly to the UK and Scandinavian countries. On the boxes of the early export models you will find these brilliant little stickers of the flag of the intended destination. Adidas Austria also produced models specific to the requirements of national distributors. Adidas’s early distribution system worked by having partnership agreements with companies in different countries - they had no regional offices themselves. Often these companies already had experience of working in the sports, textile or leisure industry, so for example in the UK distribution was handled by Umbro who manufactured football, rugby and hockey kits. The production of special make ups (SMU) for national distributors means that many Austrian models were produced in relatively small quantities and consequently are amongst the rarest models for vintage collectors to find these days. 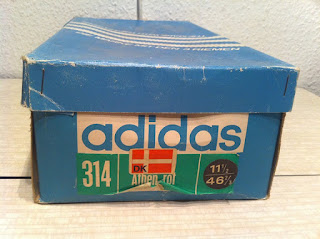 'Athen Rot' for the Danish market 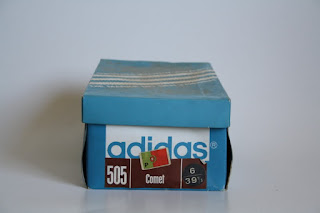 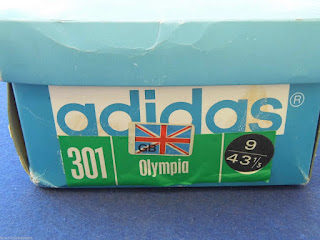 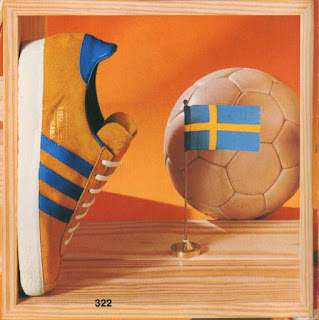 'Mexicana' SMU manufactured at the request of Gunnar Lundström AB the Swedish distributor of adidas and produced in national colours.

So why did the Austrian factory exist? During some research I recently spoke to Jürg Stucki the former CEO of Intersport International Corporation from 1968 to 1997. In case you don’t know Intersport is a chain of European sports retailers formed from buying organizations in 10 different countries. The initial ten countries consisted of Austria, Belgium, Denmark, France, Germany, Italy, Netherlands, Norway, Sweden and Switzerland. At the time sports retailers tended to be small, family run businesses and while some larger companies existed, they tended to be regional or national rather than international. The size of Intersport therefore gave it a huge amount of power when negotiating with sports companies such as adidas and Puma. Don’t forget during this time adidas had no retail shops of their own and were a production company only.  Mr. Stucki explained to me that during the sixties and much of the seventies there was actually two European trading power blocks – the EEC (which later became the EU) and the EFTA (European Free Trade Association). Tax free distribution of goods only existed between member states, so if Germany (a member of the EEC) wanted to export goods to Austria (a member of EFTA) it would have to pay an import tax on its shoes. The original members of the EFTA were Austria, Denmark, Portugal, Norway, Denmark, Sweden and the UK. So there were have it, Austria was chosen as a location based on economic reasons, to lower the costs of shoes for adidas and its customers in EFTA countries.


While adidas Austria are still based in Klagenfurt, production of shoes ceased in 1990 as manufacture increasingly moved to Asia. The late eighties and early nineties were a time of austerity for adidas, closing down European factories and winding up regional distribution agreements in an attempt to re-organise and cost-cut in the face of declining sales and stiff competition. So adidas ‘made in Austria’ may be gone, but it will never be forgotten in vintage collecting circles. 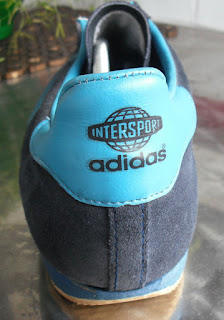 'Intersport Star' circa 1977 from Carl Dimelow's collection. Both adidas and Puma designed exclusive models for Intersport which were only available in their stores. 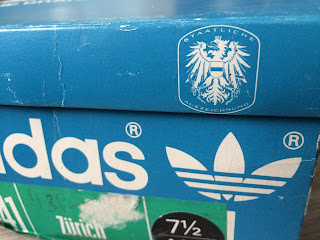 Watching the Euros has got me thinking about coloured football boots. I know it’s not a new concept, but growing up in the 70s and 80s - boots were black leather with white or silver detailing. On occasion red, green or yellow adorned the stripes, but that was pretty much into until the turn of the new millennia when colour started to creep into football design for the uppers.


Or was it? Coloured uppers actually first appeared in the early 70s although choice was much more limited and popularity questionable (I don’t recall seeing anyone playing in them, at least in the UK). Over the course of the games I’ll be dipping into the archives and showing some models made by both adidas and Puma which would have certainly made you stand out from the crowd.

Adidas produced a couple of coloured boots in the 60s such as the ‘Stabiloflex’ and ‘Sport’, but these were multi-purpose cleats suitable for hockey, field handball as well as football. The first football boots I could find were ‘Gerd Müller Blue Star’ introduced in 1973 and the third adidas boot named after ‘Das Bomber’ the Bayern Munich and German national team star. 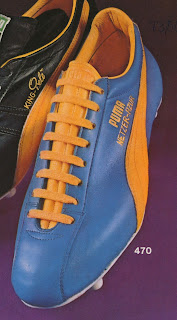 Puma’s equivalent actually pre-dates the Blue Star. Netzer Azur was introduced in 1972 and like his brother, Rudi saw the marketing value of signature boots, this one adorning the name of Borussia Mönchengladbach midfielder and twice German Footballer of the Year - Günter Netzer.


Hello and welcome to my blog. I am an collector from the UK and will be posting pictures and information about adidas and Puma sports shoes. Feel free to contact me, I am always interested in meeting fellow collectors. Enjoy!
Posted by Unknown at 01:22 1 comment: