I picked up a pair of ‘Archer’ this week in a swap deal. I have been after some for many years. I had the re-issue but it is amazing to actually get an original made in West Germany pair and in such great condition. These shoes are pretty rare to come by these days and I guess they weren’t manufactured in great numbers as they were made for a specialist sport. That inspired me to take a look at some of the weirder but just as wonderful shoes adidas have produced over the years. The brand may be most famous for making football boots, tennis shoes, basketball shoes, runners and trainers but Adi was never shy from turning his hand any sport - in fact he enjoyed the challenge. He would often pick apart the competitions shoes and look for ways to improve design, stability and comfort. In fact I can’t think of many sports that adidas didn’t attempt to produce a shoe for. Here’s a look at some adidas shoes from more obscure sporting disciplines. 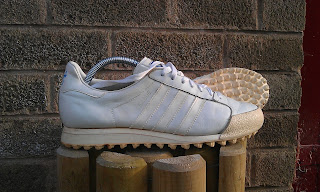 League - ok so cricket isn’t an obscure sport but in terms of world-wide appeal it tends to be associated with countries that have a close association (past or present) with the UK. Adidas introduced cricket shoes to its range in 1971 and they mainly featured in UK catalogues. Cricket shoes were also manufactured under licence in Australia, New Zealand and South Africa – all big cricketing countries. Adidas produced both spiked and rubber soled turf shoes for the sport. The pair of ‘League’ in this photo were manufactured in Yugoslavia in 1981 and typically for the sport have a white upper which is made from leather. The sole is a rubber multi-studied profile which it suitable for both outdoor and indoor cricket. I own this pair and I really love the design, especially the big overlaid toe box. 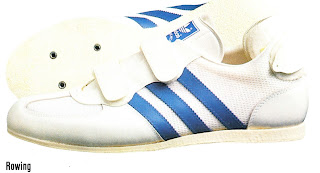 Rowing – adidas commercially introduced a shoe for rowing in 1978 but had custom modified shoes for the sport from a much earlier date. This version taken from a UK 1986 catalogue is made from a nylon mesh and leather combination. The shoe is made for ease of use. It is attached to a plate in the boat via the sockets in the sole enabling the rower to push off. The Velcro straps and ankle collar are designed for a quick release in the event of capsize. 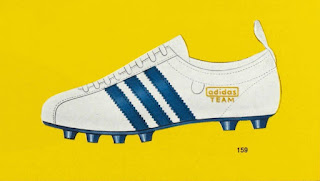 Team – This boot is for grass field sports and in particular hockey. Field hockey is another sport which has the most appeal in countries where the UK had a major influence on culture and economics. It’s incredibly popular but lacks the major investment of other sports so is mainly played at junior or amateur level. Taken from a 1965 catalogue ‘Team’ has the typical hallmarks of a football boot with a vulcanised rubber sole, but is finished with a white upper and blue stripes as opposed to the typical black and white of football boots. 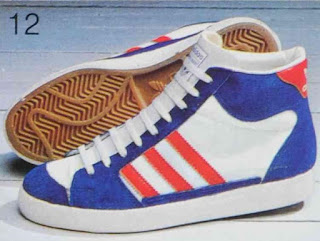 Super Skate – adidas invest a lot of money in skateboarding these days but that wasn’t always the case. Super Skate is one of two models produced by adidas France in the late 70s to cash in on the skateboarding craze. The uppers are cut high for stability and to protect the ankle and are made from Cangoran. Suede overlays offer additional protection to the upper. The sole until is flexible and has a herringbone pattern. Presumably this model and its companion the ‘Skate’ weren’t that popular, they were produced for just three years. Adidas didn’t return to the skateboarding scene until the mid-90s. I like the design of these and they are really colourful. It’s difficult to find a pair of the OG these days due to the uppers material, but adidas re-issue them from time to time. 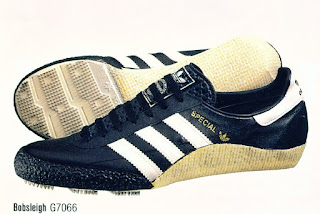 Bobsleigh Sprint – Now this is a sport which surely you have to have a few screws loose to participate in. Hurtling down a solid walled ice track at speeds sometimes reaching over a hundred miles an hour isn’t on my bucket list. The earliest catalogue I could find a bobsleigh model in was from 1978 but I found a picture of a high top boot which looks earlier than that. Whether it was an SMU or commercially released I don’t know, but by the mid-80s bobsleigh shoes appear quite frequently in adidas brochures. As a side note I’ve also seen a 1960s Samba which has been modified for the sport which looks pretty mad - probably Adidas’ first attempt at a shoe for the sport. The shoe featured here is German made and taken from the 1986 UK catalogue. It has kangaroo leather uppers with a rubber toe guard. The outsole is like the construction of a sprint shoe with a half nylon section and a built in nail plate at the front section for pushing off. 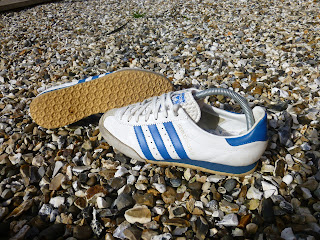 6 – Keglerschuh – Every adidas fan has heard of the Kegler, it’s most famous form is the Kegler Super introduced in 1981 and with a vario shock sole like on an LA Trainer. But adidas has a much longer association with the Germanic sport. The first ever adidas catalogue (dated July 1949) features a keglerschuh in its pages. But what is a kegler? To kegeln is to bowl and kegler is a derivative of ten pin bowling with slightly different rules (there are only nine pins) and scoring. It’s extremely popular as a leisure activity and sport in Germany and Austria and also I found out quite popular in Australia after Germany settlers took the sport over there. I’ve included a picture of a pair from own collection here. Made in circa 1977 in West Germany they have white oxhide leather upper with blue stripes and a really big toe bump to protect the shoe from sliding movements as you bowl. The sole unit is a microcell design with the familiar star profile. It’s a great looking casual shoe worn with jeans and one of my favourites. I don’t think the ‘Keglerschuh’ was very popular or sold much outside of Germany (it’s not in the UK or US catalogues) which is pretty weird for such a famous shoe, but then again like the ‘Handball Spezial’ it’s got a lot of attention retrospectively. By the way, the Austrian version is called ‘Gut Holz’ which is a bowling greeting translated literally as ‘good wood’! 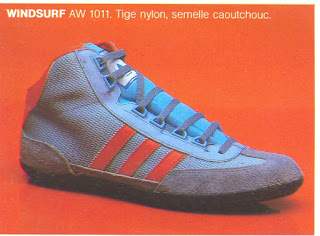 7 – Wind Surf – Both adidas Germany and adidas France produced boots for this surface water sport, normally associated with people showing off. Actually adidas Germany made several models;- Wind Surfing, Wind Surfing II, Wind Surfing Super, Wind Surfing Super II, Regatta, Regatta II, Water Competition and Water Competition II. I’m going to look at the French version introduced in 1981 in a pretty cool colourway. The upper is made from Polyester with velour overlays and has a rapid lacing system. The sole unit features maximum grip and is actually the same as the badminton shoe ‘Net 80’ - evidence of adidas recycling technology for a variety of sports. 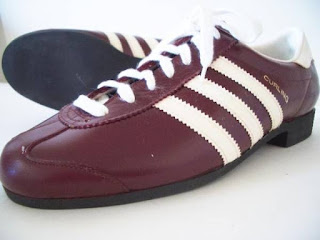 8 – Curling – I actually like curling. Seriously, next time the Winter Olympics is on, check it out – it draws you in. Curling was invented by the Scottish and is popular in cold weather climate countries in Northern Europe and North America. Adidas made several different boots and shoes for curling in the 70s and 80s but I’m posting one which I found a picture of some years ago. I can’t find this version in the catalogues but it was made in Yugoslavia in the mid to late 70s, as the eighties designed ones were much more technical. It’s made of maroon coloured leather and has a totally smooth sole with a stepped heel presumably for gliding and then stopping. Adidas also made a curling shoe in the 70s called ‘Edmonton’ and named after capital city of the Canadian province of Alberta. 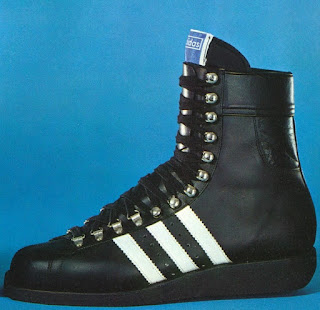 9 – Scutzenschuh – (Translated as shooting shoe) is designed for competition shooting and according to the blurb is developed in accordance with UIT rules. Rifle events have been part of the Olympics since the very first games held in Athens in 1896. Adidas introduced the shoe in 1971 and it changed very little over its relatively long life span. The upper is made of strong calf leather while a soft area at the ankle offers support. The lacing system allows the boot to widen from a kneeling position avoiding discomfort. The sole is slanted and hardened to offer maximum stability from recoil. Adidas also made a rifle boot called ‘Shooting Competition’ as well as a one for the biathlon Winter Olympic event called ‘Stock-Heil Super’. 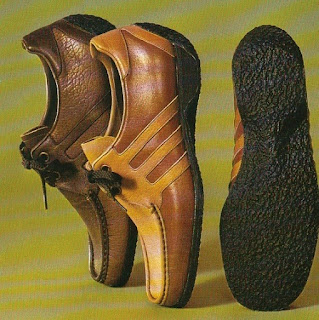 10 – Autofahreschuh – years before the famous ‘Monza’ Formula One boot adidas released the ‘Autofahreschuh’ or in English the ‘Car Drivers shoe’. Introduced in 1974 the shoe has a casual look about it, subtly incorporating tonal three stripes into its moccasin cut. It has a leather insole and a paddled heel, but must interestingly (and hopefully you can make it out from the picture) it features a running path from the heel to the ball of the foot. This characteristic means the sole remains flexible and cannot catch on the pedal. 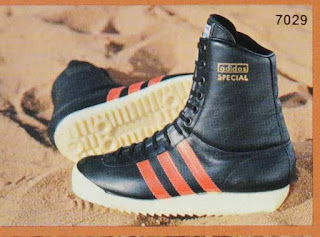 11 – Parachuting Boot – What adidas made a boot for parachuting? Yes, why not! The Fallschirmspringerstiefel to give it its German name debuted in 1977. It’s a high top boot specifically designed for jumping with a thick wedged sole for impact landing. The tread of the outsole is a sawtooth profile like on an ‘SL 72’, Austrian ‘Samba’ or ‘Jeans’. The version pictured is the oxhide leather model but you could also get the boot in nylon with more striking colourways and called the Parachuting SL. 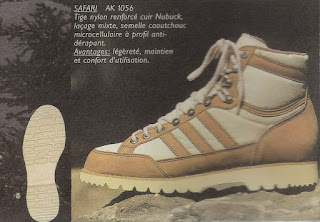 12 – Safari – I know technically not a sport (unless shooting animals with a gun is your thing) but I just like the design of these boots. Part of the French trekking range these were only produced for a couple of years in the mid-80s. They are made from nylon with nubuck overlays. The colourway is a perfect combination for the shoes moniker. 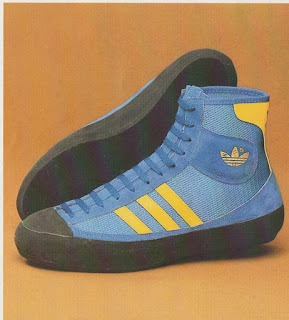 13 – Felksletterschuh (Rock Climbing Shoe) – adidas began its association with mountaineering in the mid-70s, but the 1980 Felksletter was the first shoe specifically for rock climbing. The upper was made from a nylon mesh and a specially made rubber sole offered the best possible grip. The shoe was released in several different colours throughout the eighties and saw a re-issue in 2004/05. 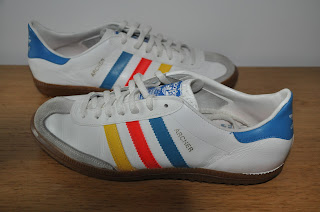 14 – Archer  - I’m finishing up with the Archer, a shoe for the Olympic sport of target archery. These don’t appear in any of my catalogues but I do have a magazine advert dated 1979 and based on the insole pattern and tongue my shoes date from around then. The overall shape of the shoe is similar to a German indoor ‘Samba’ or perhaps more closely the ‘Special Turf’ football shoe. They have a thick multi nubbed sole unit for grip on turf and perhaps the best feature of the shoe is the stripes which are coloured blue, red and yellow. It was unusual at this time to have different coloured streifen but there is a reason. It’s actually a clever nod to the colours of the rings used on an archery target.