I’m taking a look at ‘Ringo’ today, an Austrian made football trainer from the late 70s. If you grew up in the late 70s or early 80s in the UK then you may well remember lads wearing these. 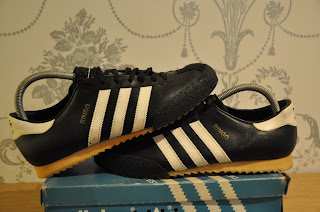 My recently purchased Ringo and in fine condition for their age.


Firstly, what is a Ringo? Well I’ll admit I have no idea! I couldn’t find any football players from the 70s called Ringo and I can’t recall it being a term used in football in any capacity. There is of course a famous Liverpudlian musician who goes by that name. There was also some savoury snacks called Ringos made by Golden Wonder which you could get in the 70s/80s and I found that there is a strategy board game of Germanic origins called Ringo. Beyond that nothing and it seems an odd choice for a name - so if anyone can shed any light on it let me know. The only connection I could possibly come up with in terms of the above mentioned was that Ringo Starr is one of the most famous sons of Liverpool and when the shoe was released Liverpool FC were one of the most famous football clubs in the world, so someone in marketing said, ‘Ok, lets plump for Ringo’. Also at the time Liverpool was emerging as the home of the football casual, and football lads wore adidas trainers… 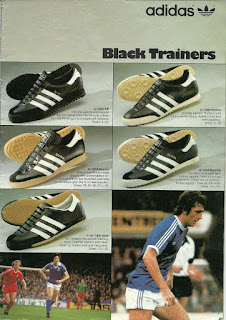 
Which leads us nicely onto the shoe itself. I don’t think you could buy Ringo anywhere else than in the UK. It was one a series of black footy trainers manufactured by adidas Austria with the British market in mind. The full set was Samba, Bamba, Mamba, Ringo, All Star and All Black. The UK football range was also complemented by the German shoe ‘Coach’ and the French ‘Kick’ (which many have said was their first adidas shoe because of its extremely cheap price tag). If you compare the Ringo to other Klagenfurt made shoes you will no doubt see similarities. Black split leather uppers, complimented by white, silver or (occasionally) red stripes and more often than not: – a sawtooth profile sole with a thick toe bumper at the front of the shoe for protection. The Ringo’s toe bumper is particularly thick and is coloured black, which seems to be the main difference between that and other models. These types of trainers were immensely popular in the UK, school kids wore them to play football on concrete playgrounds, lads wore them for playing on grass in local parks and you could just wear them casually out and about, especially if you were going to a football match. 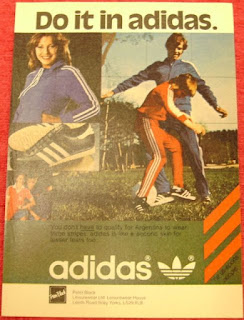 A 1978 Peter Black advertisement for Ringo. The tag line reads 'You don't have to qualify for Argentina to wear Three Stripes. England FC disastrously failed to qualify for the 1978 World Cup in Argentina.

What’s interesting about the Ringo is that it is extremely rare shoe to find these days. This pair are one of maybe only a handful that have emerged for sale in the last decade. Furthermore, I could not find it any catalogues, UK or otherwise and I have the complete set of UK Umbro product catalogues from 1978 to 1986 which is time frame in which Ringo were manufactured. So what is it with this almost ‘phantom’ like shoe? 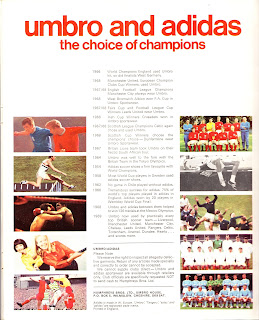 Umbro and adidas the choice of champions. Taken from the 1969 product catalogue.

The Humphrey Brothers (aka Umbro) were the main distributor of adidas in the UK starting in 1960. The deal worked well for both parties. Adidas didn’t have any retail outlets during this period, so had to use others to sell their products. Umbro were a manufacturer of sports kits; - for hockey, rugby and most importantly football. Football boots formed a major revenue stream for adidas and Umbro provided the contacts, distribution networks and retailers which allowed the brand to grow in the UK. They also provided kits for many top flight British football clubs, who were happy to kit out their players in wonderfully designed German football boots, further expanding the brands appeal. However, it was not professional footballers (who usually received their boots for free) which provided revenue for adidas, this came from amateur and up and coming athletes. Umbro distributed adidas products to specialist sporting goods stores because at this time adidas products were still marketed towards sports people. 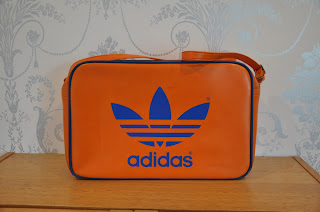 In the mid-1970s Peter Black also become a distributor of adidas and are best known for manufacturing vinyl sports bags from their factory in Keighley, West Yorkshire. These bags are bomb proof and stand the test of time. If you’re interested in getting one you can still pick one up for a reasonable price. But perhaps what isn’t so well known is Peter Black also distributed adidas footwear. I’m not sure whether this peculiar arrangement of having two distributors exists in any other country, if anyone knows let me know. But what is apparent is Black was given a licence to distribute to retailers outside of Umbro’s network, such as high street fashion stores, shoe shops and mail order catalogues. 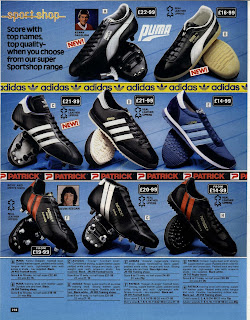 A 1982 mail order catalogue advertising a later version of the Ringo. You could pay for the shoe over 20 weeks at the cost of just £1.10p a week!

Marshall Ward, Kays, Littlewoods, Grattan, Janet Frazer, Burlington. The UK had loads of mail order catalogue companies in the 70s and 80s. Your mum got sent this massive colour catalogue through the post with hundreds of pages in. They basically sold everything from furniture, to kitchen appliances, electrical goods, to clothes. As a boy growing into a teenager you would naturally gravitate from the toys and games section, via the (ahem) ladies lingerie pages, to the sports section. Here you could find trainers and tracksuits from adidas, PUMA, Nike, Gola, Patrick, Dunlop, plus many other brands. The best part of the deal was that you could buy now and pay later. So you could receive a pair of trainers and spread the cost of them over a period of weeks. This greatly increased the popularity of adidas in the UK because it made them accessible to low income families. Finally you could get your hands on a pair of adidas, which the older working lads could afford. 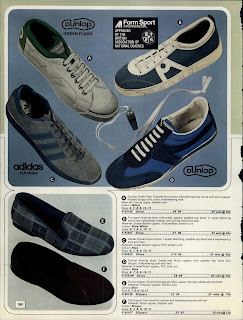 So it would appear that Peter Black were given exclusive shoes to sell in the UK, of which I think the Ringo was one of them. Another possible UK exclusive and also very difficult to find are Bali. Bali take the colourway of a Tahiti and add it to the shape of the Hawai. Again like the Ringo they don’t appear outside of literature produced by Peter Black and in no catalogues outside of the UK - not even the French catalogues where the shoe was produced. Of course none of this explains exactly why the shoes are so rare, but if the shoes were only sold in one country and through specific retailers, then they may have been produced in smaller quantities in comparison to general release shoes. 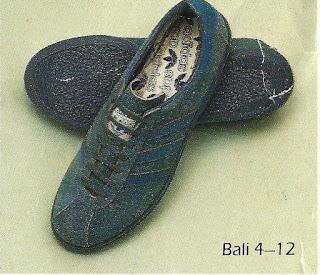 As a footnote;- In 1986 adidas decided to buy Umbro International Footwear Ltd (a subsidiary of Umbro International Ltd) to form Adidas UK Ltd and in 1988 adidas bought Peter Black Leisurewear to have complete control of adidas products in UK. Thanks to 10ari and Thomas Turner for help with this article.
Posted by Unknown at 05:56 6 comments:

It has been a while since I last posted! I'm putting an article up today, but I'll start with these shoes first. You may remember I was working on a book about adidas and I still am (slowly). I'm looking for anyone who may own or knows someone who owns the following shoes. I'm not after purchasing them (although I never turn down opportunities to expand my collection). I'm looking for information and good quality pictures of them for my book. So please contact if you have them. I'll post a few over the coming months, but here is todays requests 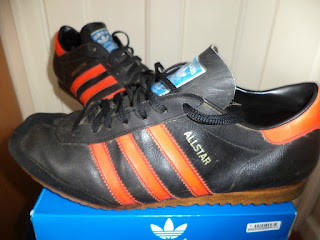 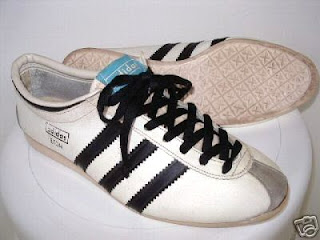 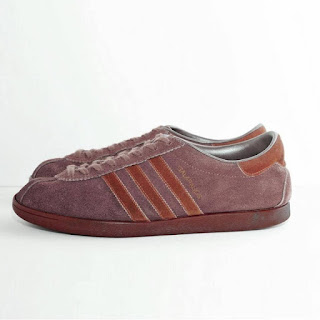 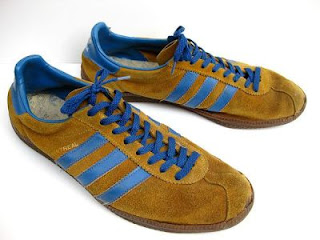 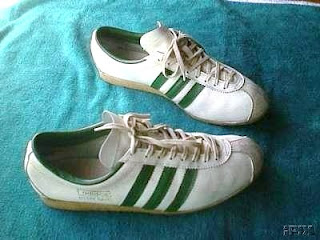