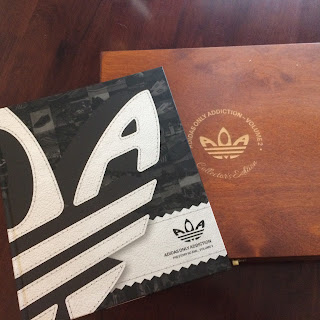 I received my copy of the AOA Collectors box set the other day and well it is simply amazing! Well done to all involved in the project, quite simply the best book on adidas produced so far. The boxed set was a limited edition for AOA members, but the book is available separately and is 100% worth a purchase. Check the link below to grab your copy, order can be posted worldwide 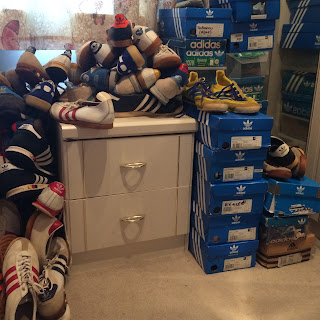 Laces Out is almost upon us, in fact a week today no doubt I'll be waking up with a hangover in Liverpool. A few lads I know are getting together to have a stall and I may well be moving a few pairs from my collection on as I have far too many shoes (as my wife tells me daily). I pulled out a pile of shoes which could be sold and here they are. DISCLAIMER - knowing me I'll put most of the back in my cupboards as I can't bear to part with them, but some of them will make it to the table. Come and have a look what we have for sale and have a chat with us!

Info on Laces Out can be found here

Email ThisBlogThis!Share to TwitterShare to FacebookShare to Pinterest
Adidas Only Addiction The Story So Far Volume Two had a number of extra gifts in the Collectors edition. We asked AOA members to select their favourite adidas trainers from a list of 60 models. The shoes that received the most votes were compiled into a top twenty and presented in booklet format. I worked on the text for the booklet and Craig did the layouts using pictures of a number of collectors shoes. The final product really blew me away. He is number four on the list. 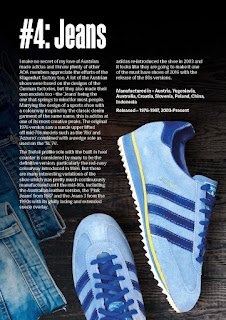 Email ThisBlogThis!Share to TwitterShare to FacebookShare to Pinterest
I'm working on a book project for 2017 about adidas shoes, if you read this blog and have a collection of pre 2001 adidas training shoes and you are not someone I normally communicate with through social media then please get in touch. I may well need your help with completing the book and I love meeting new adidas fans from all over the world. 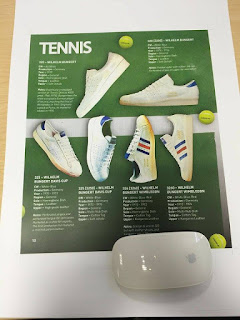 Email ThisBlogThis!Share to TwitterShare to FacebookShare to Pinterest
Talking of 'adi bucket' lists I also recently managed to tick another one off, courtesy of my good friend Kenny Manton - a sports shop deadstock find! 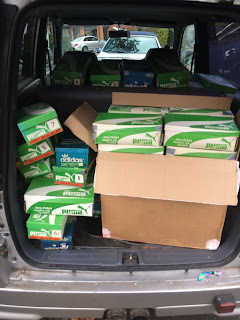 
It's the kind of thing you have dreams about - finding a haul of old shoe stock, untouched;- still in the original boxes and tissue paper. The Spezial teams find of the Carlos haul from Argentina has been well documented and had many a mouth watering and an eye weeping. This isn't in that league but it's still great to find one. 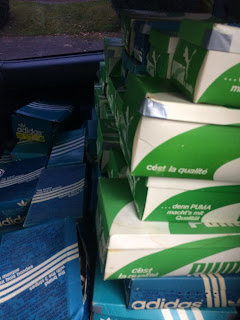 The haul was over a hundred pairs of adidas and PUMA.


It was an extremely long Sunday drive to pick this lot up, but well worth it in my opinion. The owner of the stock found it in his dads loft while having a clear out. The family had briefly run a sports shop in the early 80s but the venture hadn't been successful. At the time his dad had been offered a price to take all the stock off his hands, but the offer was so measly that he decided to keep it and it has been sitting in the loft for about 35 years! There were cricket bats, snooker cues, tracksuits, sports socks and of most interest to us PUMA and adidas training shoes and football boots. These shoes were in pristine condition - no mould, no dust, no crumbling soles (even on the PU models), no damage from the sun - box fresh! It was like a moment frozen in time, going back to 1982 and seeing all these great models like PUMA Dalglish Silver and All Sport and adidas LA Trainer, Action and Kick and you can image these shoes lined up in a stock room waiting for a buyer which never came along...until now. 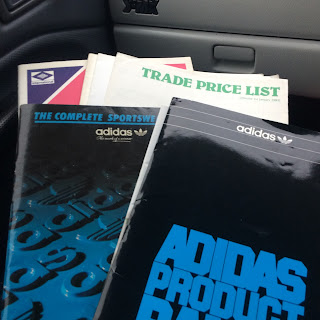 It also included sports catalogues and price lists from 1982, both adidas and PUMA!

The third and final part of my visit to adidas, a long overdue post I know! We are inside the archive and basically it is rows and rows of shelving with white boxes on. At the front were some shoes on display which hadn't yet been archived or were being worked on for current projects, but everything else was sealed enticingly away. We were guided around the different areas;- shoes, textiles, footballs and bags and Martin H showed us a good few gems including Muhammad Ali's signed boxing boots and world cup match balls. Then we got to request to look at shoes from the archives and Martin would go and fetch the box (amazing how he knew where everything was) and bring it out for us to take a look. We had over an hour in here but it seemed to pass like ten minutes. Here is a look at my favourite 5 models I viewed on the day. 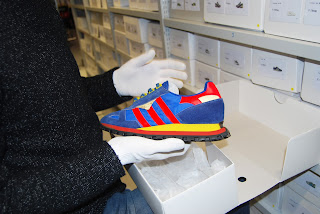 Ok most people have seen these and they were of course re-issued as PT Running 76 (as far as I can remember that was the name anyway). Adidas did about 6 or 7 mock-ups of the shoe including one with a ventilation pipe extending from the sole, but Martin at the archives couldn't find it! They were the 1976 prototype for the Formel 1 running shoe which was released in 1977 and although the colourway and materials changed you can see clearly see inspiration for the shoe in this prototype. Back in 1976 adidas were losing ground to Nike in the American running market because they didn't really have many jogging or road racing shoes - so Adi himself worked on some new models including this and the TRX. So there is a lot of design elements in this one shoe like the thick wedged foam midsole for cushioning, the extended outsole for balance and shock absorption and the cut away suede reinforcements at the front which for strengthening the shoe but also increased ventilation. The reflective section on the sole and reflective triangular strip were never used on the final model. The foam wedge on this prototype was quite rough as it was cut by hand - and while exposed here, the finished article would have the wedge encased inside a plastic mould. 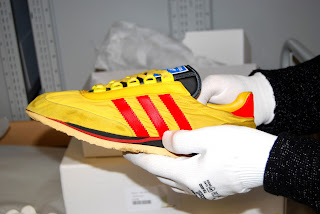 You may have seen pictures of these floating around the internet before, I had. They are simply amazing close up. They do not have a name but Martin called them SL 74 because they were made around that time. The upper is nylon and has ghilly lacing like on the SL 76 but the sole is hexagonal pattern microcell wedge which was used on the 'Runner' model. Adidas therefore really made two final products out of this prototype; - the SL 76 and the Runner. 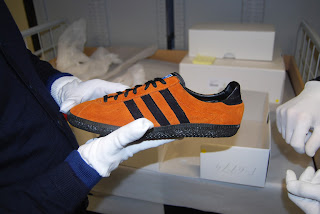 It wouldn't have felt right to visit the archive and not get to see something Austrian made! These Mustang certainly made me feel better, all the more so because they are super rare, in fact only the third pair I have seen. They were manufactured in 1974 (as can be confirmed by the 'pre Trefoil' vinyl tongue) and were a sight to behold. The colourway will draw comparisons to the Mexicana but the sole is a 3 zone type and in black! Adidas didn't make enough training shoes with an all black sole, which is a shame because it finishes the look of shoes off so well. 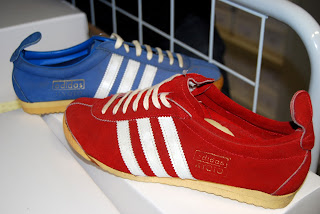 I had seen the red pair in a previous archive picture from many years ago and the blue in a mid 60s French catalogue so I was certainly aware of their existence, but to see both together was amazing. The Kyoto are an extremely rare French shoe from around 1966, one of the first adidas models to be made of suede. The colours may draw comparison with Gazelle but the style is more like a suede version of 'Vienna' or 'Buda' (as they called it in France) with a wavy Olympia type sole and a rubber toe bump at the front of the shoe. As far as I know there was no direct German equivalent of these, unlike the Chamois which was known as Gazelle Blau in Germany and the Rubis which was Gazelle Rot. But the French catalogue code for Kyoto was #3252 which was latter used for the Mexicana model so I guess these morphed into Mexicana at a later date. The colour on these two models was simply stunning, particularly the reds which were so vivid. Interestingly the red and blue seemed to have slightly different finishes and feel, not sure if that was because they were made from two different types of suede or because one had aged less well than the other. 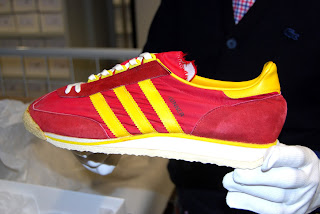 I saved my favourite until last. Runner circa 1976/77. It is unknown if this shoe was ever released in this CW. The traditional colour was yellow-blue, although some colour variations do exist, but these Runner are made from Nylon which is odd because Runner are normally a thick nylon mesh material. So they could be a sample or maybe they were made for a US University team (possibly USC) as a friend has some Texas State CW SL 72. Both adidas and Nike were making SMUs for university teams in their colours by request.

Well that was my archive visit, thanks to all at adidas who made it happen and were so welcoming, it is a day I will never forget and it definitely ticks one off my 'adi bucket' list.