Rom around the World


A recent question on a forum I belong to was ‘which adidas shoe has been manufactured in the most countries’? Plenty of possible candidates and you could go for the Superstar, Gazelle or Samba perhaps, but the winner is the Rom. So I’m going to take a journey across the globe to find out where Rom were made and perhaps some of you may know of even more countries these shoes were manufactured in?


Does the Rom need an introduction? I guess a short one should suffice for one of the most popular shoes ever made by adidas. First introduced in 1958 as an all-purpose leather training shoe for athletes ahead of the Olympic Games in Rome, the shoe was in pretty much continuous production until the mid-90s and has been re-issued several times since. While the type of the sole on the shoe changed over decades, the shoes shape remained pretty much the same with white uppers and with blue stripes representing the colours of the royal house of Italy. The Rom has a few notable variants to the style, as well spin off models such as the Super Rom and Rom 2000. So let’s head off to Europe, starting with…. 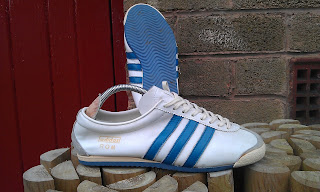 Where else by Germany? The shoe pictured is from own collection and dates from the mid-60s. This is the second version of the Rom with oxhide (as opposed to elk) uppers and the blue Olympia sole unit. You could get Rom made in Germany up until the mid-80s although adidas also used factories in other countries for production. I’ve also even seen a German pair dated 1995, surely amongst the last general release shoes made in the Scheinfeld factory. 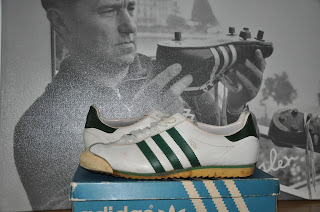 I’m including a second German Rom here, mainly because I bought it recently and haven’t had chance to show them off! This shoe dates from around 1977 and you can see that sole is a different design being a sawtooth profile. The stripes on this version are green and this model is typically referred to as the West German Police Rom. It is said that the white and green version was made specifically for the police (and some say army) but I don’t have any actual evidence to confirm it. White-green Rom are always made in Germany and that colourway never appear in any catalogues so it may well be true but if anyone has an evidence I’d love to see it. 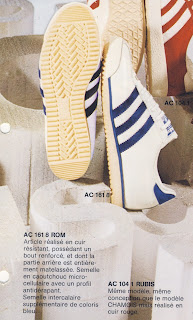 Adidas opened a factory in France in 1960, famously run by Adi’s son Horst. The first shoes out the factory were all based on German models before adidas France started making their own designs from the mid-60s onwards. So no surprise that they made a Rom model. The catalogue picture here shows how the French version looked in 1973. It’s pretty similar to how the German version looked at the time although the sole unit is an exclusive French design. Rom was manufactured in France until 1984 and a Velcro fastened version also exists. 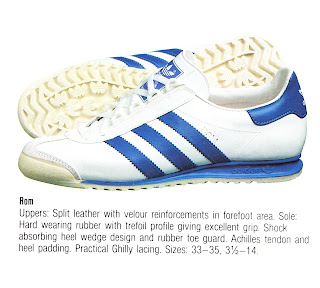 Rom was also one of the first shoes out of the Klagenfurt factory in Austria when it opened in 1969. If you bought a pair of Rom in the UK back in the day then it’s more than likely that it was Austrian made, which isn’t a bad thing in my books. The version I’ve decided to include is a mid-80s variant which apart from having the new sole design (which was introduced in 1978) have a ghilly lacing system, a rarity on the Rom. 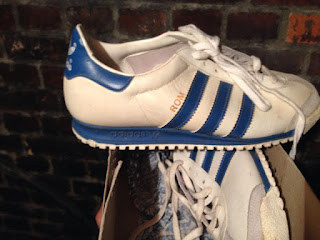 This Spanish made pair of Rom (owned by Funkyadiadi) were made in the early 80s in the factory in Zaragoza. They look very much like a typical 80s Rom, although if you turned the shoe over you would see an unusual outsole pattern as used on French shoes such as ‘Nadi’ and ‘Java’. No surprise really as the Spanish factory had a very close association with Horst Dassler. 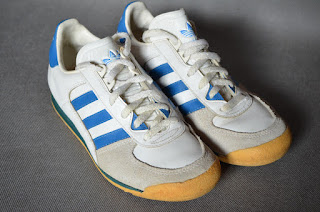 The Yugoslavian factories were used by adidas to produce some of its most popular models. The lower production costs in that country meant adidas could offer an affordable range of training shoes to customers and therefore give older models a longer shelf life. As new technologies were introduced shoes like the Rom would move down the price brackets. For Yugoslavia I’ve included a picture of a late 80s design of the Rom here which is somewhat different in both the uppers design and lacing system. 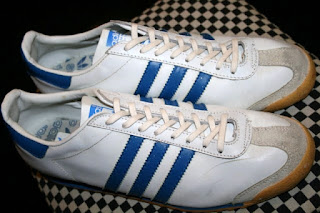 Known as ‘Rom 86’ these Romanian made shoes were the last version of Rom to be released by adidas France. The Pionierul factory Romania was relied on heavily to produce French designs in the mid-80s. There isn’t actually a great deal of difference between these and other 80s Rom designs. Picture from the good fellows at Soma in Japan. 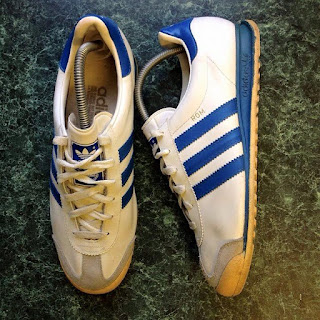 Production of adidas in Europe had pretty much dried up by the early 90s but one enclave was in Slovenia formerly part of Yugoslavia. These shoes were made in 1995 showing the shoes continued popularity. Sorry I don’t know who owns this pair. 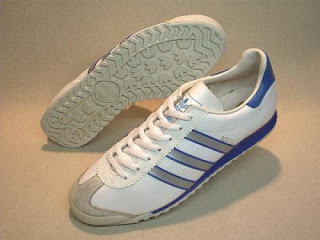 Heading over to the Americas and we have a pair of Rom SII manufactured under licence by Gatic SA of Argentina. Rom was manufactured in Argentina from the mid-1970s but these SII are from the mid-80s. They are a typical Rom design but presumably the SII (super two) part comes from the silver coloured stripes. Credits unknown. 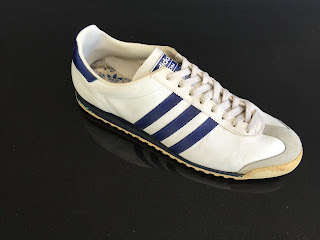 Adidas Canada can boast being the oldest subsidiary of the brand having been set up in 1958, but actual production of shoes didn’t begin until the late 70s, presumably to speed up getting adidas products on the shelves over there. Adidas Canada borrowed liberally from French and German designs this one taking the shape of the German Rom but having a French style tongue. Thanks to Gary Corbett for the excellent photograph. 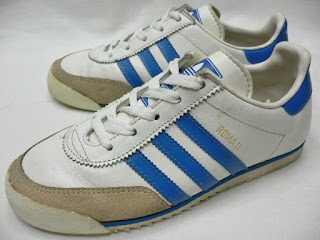 Renamed Roma for the Brazilian market, these shoes made by Vulcabras are a bit of mystery. The open toe design may suggest 80s production, but the sole unit is very 70s. Licence companies didn’t always follow the rule book when coming up with designs and as the machines and tooling to produce new models could be quite expensive, Vulcabras may have simply opted to stick a new upper on an old sole design. I have no idea where I found the picture. 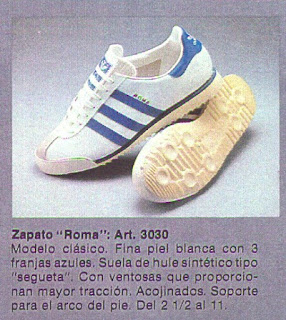 Rom was also known as Roma for its Mexican release. Produced under licence by the Canada Calzado factory in Guadalajara they are from a 1981 catalogue. 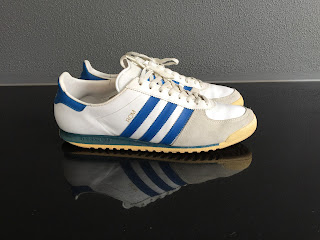 Adidas opened a production factory in Pennsylvania USA in 1980 in an effort to speed up getting their products to American consumers. Actually the factory was never that prolific in terms of different models produced, tending to focus on training, running and tennis shoes. Fortunately they did make a Rom and they produced a version with an open toe box design, known as the racing toe as it mimicked they style of toe boxes on running shoes of the time. The USA is one of the most desirable Rom models for collectors these days. Thanks once more to Mr Corbett. 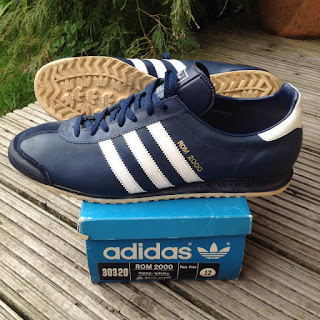 In Asia the first Rom to be produced is unsurprisingly made in Taiwan. Their first effort dates from 1975 in an era when adidas were just beginning to effectively utilise the low labour costs in Asia to manufacture training shoes. The shoes copied the designs of the German models of the time so I’ve decided to show these Taiwanese Rom 2000 from 1983. Image provided by Rory Cooke. 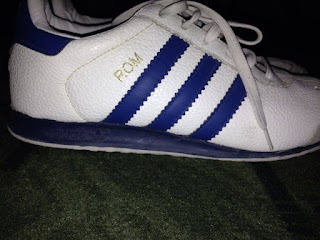 Adidas was made in Korea from 1986. I’m not sure of the exact date on these Korean made Rom but I’m thinking 1992-1994. These shoes look pretty low grade in terms of shape and materials. It reflects a period in the early 90s when adidas paid less attention to some of their re-issues. Apologies for the quality of the picture, I have no idea where I found it. 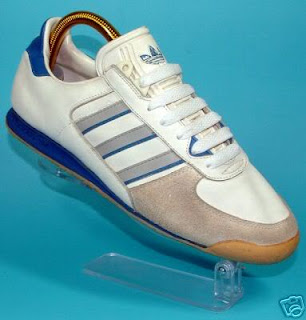 Rubber World may sound like an adult magazine but it was actually the company employed by adidas to produce shoes in the Philippines starting in 1980. It demonstrates a period when adidas were increasingly looking to Asia for the production of its shoes. Saying that I’m not aware of a Rom being made there before 1996. This unusual version is based on the late 80s Yugo design but has two tone stripes instead. Credit unknown. 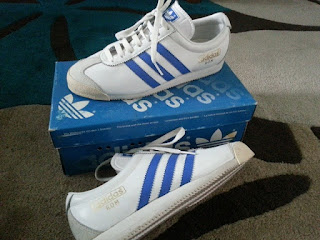 Adidas had a fairly brief flirtation with producing shoes in Thailand. These 1994 Rom are a rather unusual design with a mix of styles from several decades. They may have actually been an Asian exclusive release judging by the label on the box.  Credit unknown again. 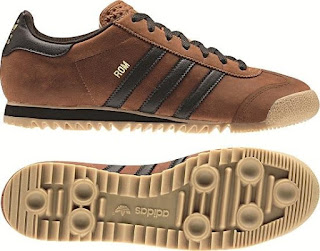 I’m pretty sure (with the exception of a limited edition German shoe) that all Rom have been produced in Indonesia since 2000. These Rom from 2011 demonstrate the use of new materials and colourways used by adidas Originals for modern interpretations. 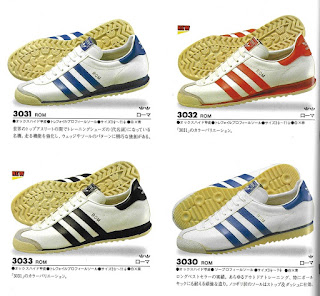 Kanemstu Sports of Japan were never afraid of mixing things up a little. The Rom were one of the first adidas shoes to be made in Japan and by the early 80s they were making them in several different colourways as shown in this 1981 catalogue picture. 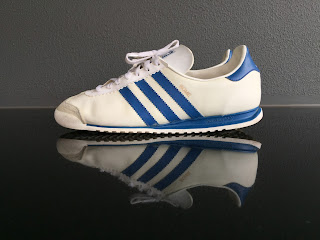 Moving south from Japan we reach Australia where shoes were being produced under license from the middle 60s making them one of the earliest licensees. The Aussies clearly didn’t think much of the Germanic spelling of the shoe so plumped for a name change to the Anglicized Rome. I’m not sure of when the Rome hit the shelves but it was certainly in production by the late 70s and was one of the most popular shoes there, being in production until Pacific Dunlop stopped making adidas in 1993. I still kick myself for not buying a pair of these when I had chance as they are of exceptional quality of materials. Shoes once more from Gary Corbett. 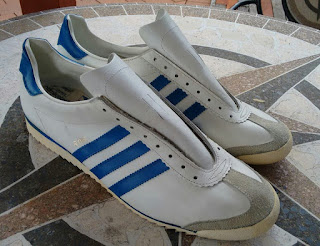 M O’brien & Co Ltd the licensee for New Zealand tended focus on sports popular over there such as cricket, rugby and running but they did produce a Rom in the late 70s. I’m led to believe the quality on these is excellent. Photo from New Zealand’s number one collector Daren Leng.

I’m finishing off with the only Rom I know of made on the continent of Africa. Although I wouldn’t be surprised if a South African version exists. The Czech shoe company Bata began producing adidas under licence in Zimbabwe in the middle 80s. These Rom 2000 in black with white stripes were produced around 1990 and are part of the adidas archive in Herzogenrauch, having been sent there for quality control purposes. They also have a pair in white with grey stripes. Little is known about adidas made in Zimbabwe and they’re among the rarest to obtain on the collectors market so it’s nice to end with something special.
Posted by Unknown at 12:29